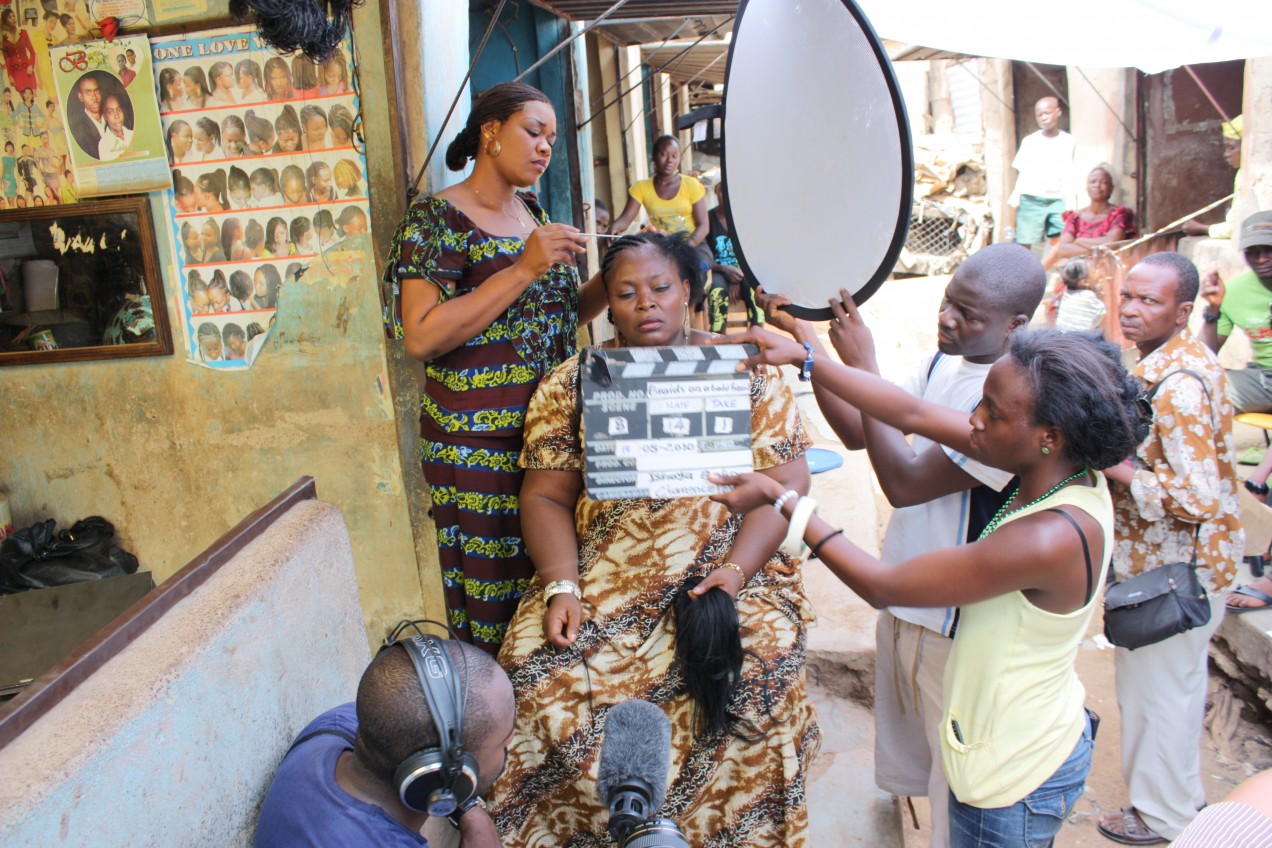 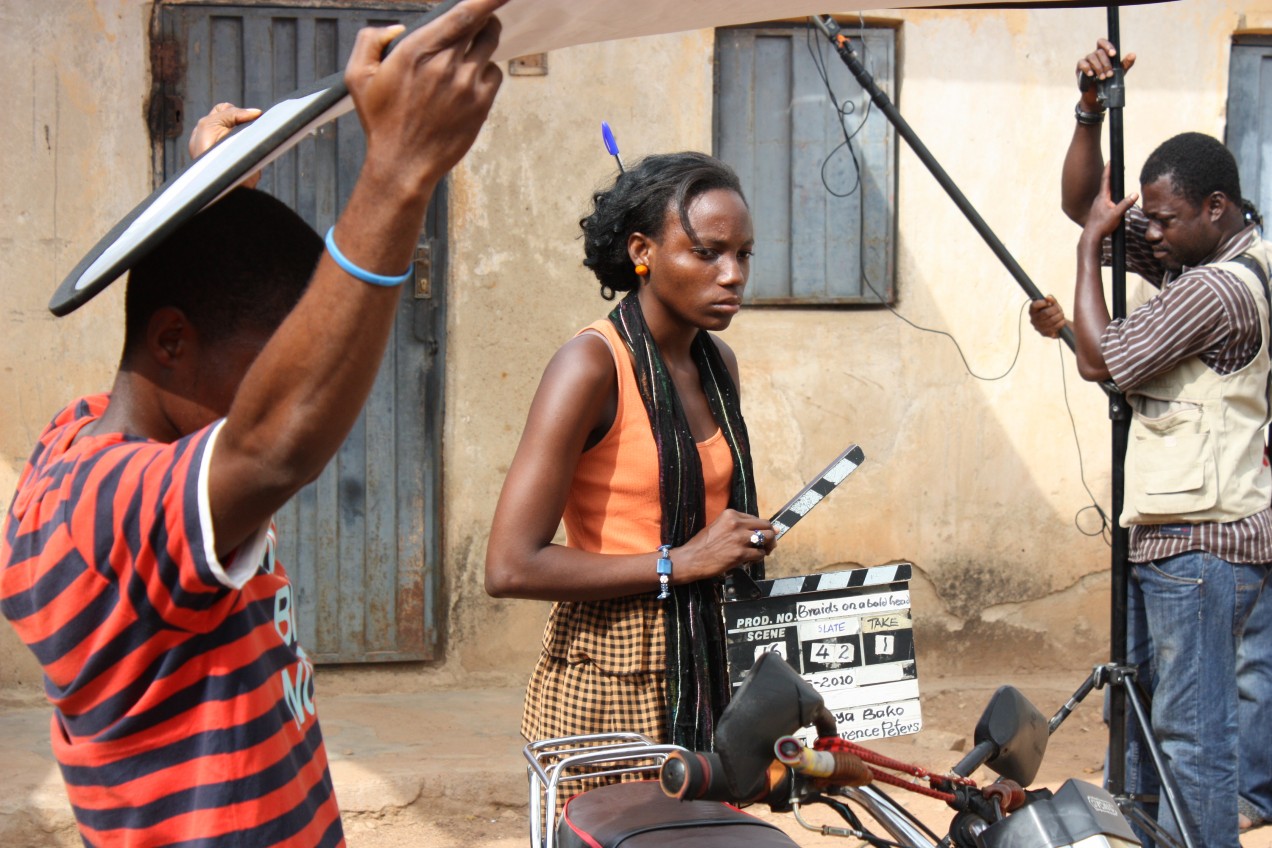 Oliver Aleogena, the producer of this film is an enigma. Tall, light-skinned with a deep, full-bodied voice, he can be likened to a young Pete Edochie. One of the first things I had to admit about him though was that he knew his shit. He knows film and he knows what it takes to make films. Correction, he knows what it takes to make good film. Completely down to earth yet scathingly honest, he was the kind of person I knew I could trust taking my baby steps in the Nigerian Film industry with. And trust gained or earned in this industry bears its weight in gold.

Our first meeting for Braids was discussing and finalizing our production schedule for the film- from week 1 of preproduction to week 8 of post production. Where crewing, casting, location scouting, principal photography, exports for feedback, music cuts and picture locks fell. We locked on and signed off on the schedule and I threw a couple of bags in the trunk and took the journey down to Kaduna to start up on what would and should be a pretty interesting journey.

Week 1 had two priorities on the books – actors and locations. Working with me on this is our beautiful and fabulous Production Manager Anee Icha; a recent graduate of Theatre Arts from ABU Zaria, she came with a dogged yet detailed ‘get the job done’ approach as well as that much needed female touch to matters that would well, become sensitive. She brought on board an interesting character that helped in a production capacity called Papa E, a retired clown/ children’s entertainer. My scepticism for him faded when in one of our first meetings he delivered a location and a set designer.  We set out to hold auditions and that’s where my first taste of how different things were going to be came. There is a lovely website- ‘castingcallpro.com’; it’s more like a database of actors in the UK, with their headshots, CV and a couple of clips of their performances. All the auditions I’ve done have been aided by this and similar websites and scheduled after correspondence with the artists.

In a country with dodgy power supply and even dodgier internet access; open auditions had to be held which had us print and paste posters in different parts of town. I had heavy reservations about this but save for placing ads in the newspapers, TV and radio which we had neither the budget nor the time for I couldn’t  think of any other more efficient way of getting word out. There are no talent agencies to mention, however, there is an actor’s guild and they were notified. Poster pasting happened in schools, the post office, churches, bus stops and DVD stores. With the word out, I anticipated a couple of different but very possible outcomes: there’ll be a good turnout of a lot of talentless people, nobody turns up or the far chance that there’ll be a mixed bag turnout of the good, the decent and the downright awful. We were holding auditions in both Kaduna and Abuja.

On the location front, we were fortunate to find a yard that suited the purposes of the film however, the difficulty became the size of the rooms in the yard- they were too small. The thought of fitting two actors, a cameraman, a sound man, continuity, the director and possibly the AD had me already sweating not even getting to think of lights! So already, the production designer’s job was cut out, matching our exteriors to whatever interiors we choose.

It’s Good Friday and I’m taking an ill-advised trip from Abuja to Lokoja. I’m with my beautiful and fabulously hung-over sister and a driver; we head out of Abuja at 8.30am and after an amazing five hours of skilful overtaking while dodging oncoming vehicles, driving through the bush, watching in awe as eight men struggle to get a bus out of a ditch, more driving through the bush, some sleeping, endless waiting, we decide to do the sensible thing and turn back to Abuja. This is because we’re stuck in unbelievably impossible traffic- we’ve created four lanes on what should be a single lane, stuck and going nowhere fast.

Beside us, a Federal Road Safety vehicle is jostling for a position within the melee that puts it some precious meters in front. It’s a pathetic situation and one that has remained so over the years, the Abuja to Lokoja road is one of the major roads that connect the North to the South and South East, and during festive periods, it is a constant nightmare for commuters. Will the government do something about it? Along with electricity, a decent educational and medical infrastructure, good roads in particular and a good transportation network in general still remain a prayer for us Nigerians, but I shouldn’t go into the failures of the government. We cancel the trip for that day and set off early Saturday morning. We get to Lokoja without incident and save the blood boiling heat; it’s quite an enjoyable holiday.

I meet family members that I haven’t seen in a while and catch up on everything and nothing. There’s a quaint and amusing 90th birthday party in Okene, where a 60-odd year old man shows some awesome dance steps, a climb up a mountain with a lovely view of the Rivers Niger and Benue meeting. I have a decent conversation with a couple of financiers who are looking to set up a film and TV studio in Lokoja. They seemed like people with a vision and a clear cut idea of how things can and should be done, they might be assets in my address book. Already things are looking up; I haven’t really had any decisive meeting or discussion about my project yet but the prospects of coming back home to Nigeria and thriving as a filmmaker look practicable albeit alluring. That I am pleased about; really pleased about. 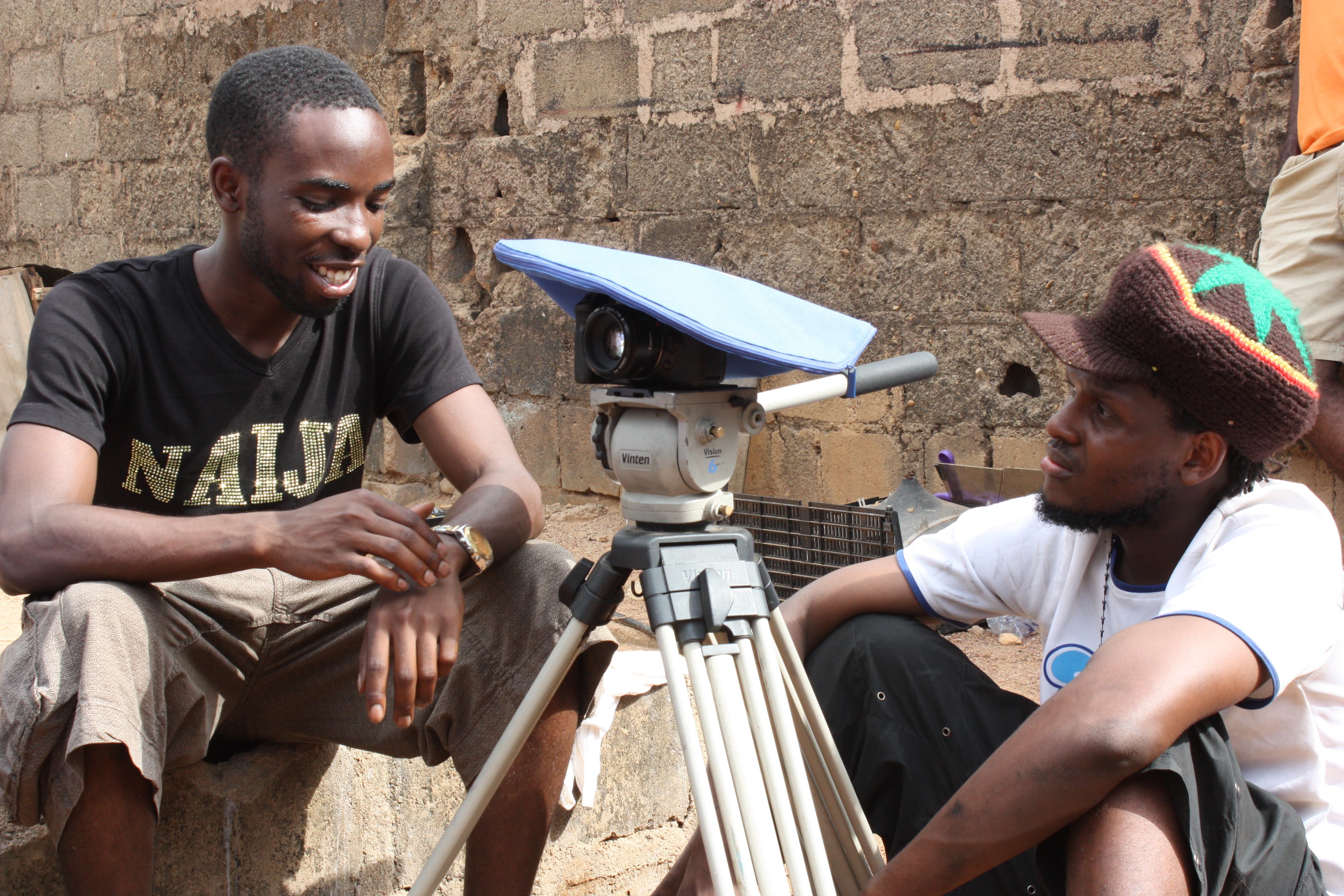 I touched down in Abuja on the 1st of April; it was balmy and strangely luminous, like everything and everyone had a light shimmer to them. From the dust covered fan that creaked while it rotated inconsistently due to the fluctuating current to the two immigration officers that checked my passport, wearing fake smiles and looking incredibly bored. I’ll attribute the glow to the excitement that flowed all through my body; and even while stuck in traffic at Lugbe going into the city, I smiled at the passengers jostling to get into buses and taxis; I smiled at the policeman who wasn’t quite sure what he was doing in the middle of the road; I smiled at two drivers arguing with each other while parts of their recently crashed cars lay on the road, oblivious to the horns of the other cars around them. I smiled at the sun rising and warming this beautifully flawed city, this beautifully flawed country.

I’m here to make a film about a poor, married hairdresser who through a brief homosexual encounter is able to muster up courage and stand up to her inattentive husband and ask for better. I have strange illusions of grandeur that are rooted in reality; I’m here for a project that addresses sensitive issues and themes. I’m hopeful, but I’m also aware of the difficulties that I will inevitably come across. My only wish is that this beautifully flawed land be kind to me- be more beautiful than flawed 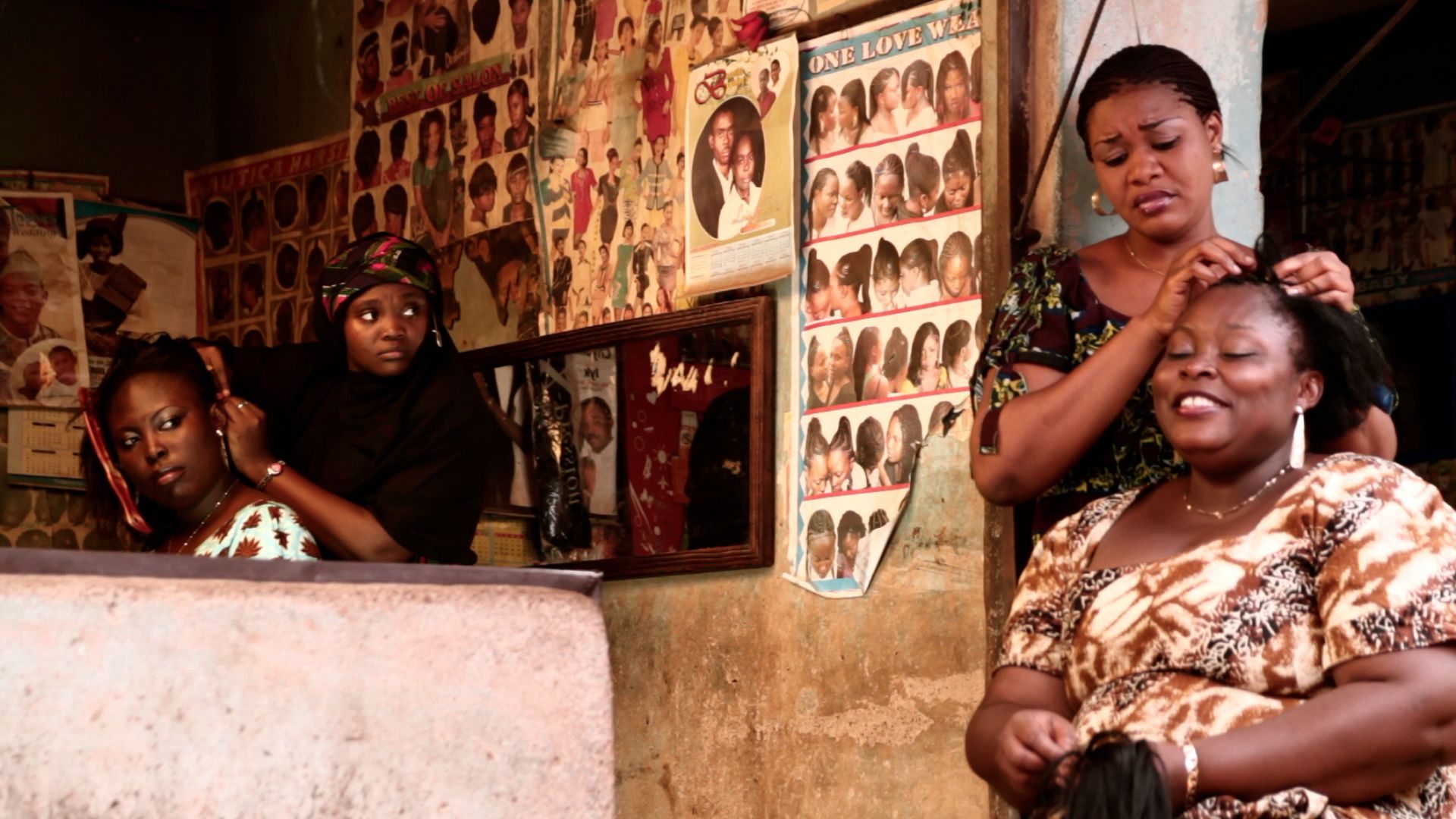 The blog for the short film, Braids on a Bald Head. Thank you for visiting.